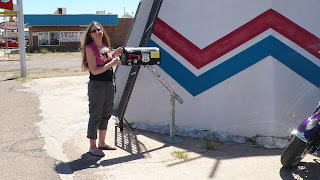 "I've been from Tucson to Tucumcari"
Lowell George

I didn't actually go from Tucson to Tucumcari; however, I did go from Borger, Texas THRU Tucumcari, New Mexico on my way to Albuquerque along portions of old Route 66.

My trip was for the purpose of sharing the middle-school primer I had written about my Grandfather, Zero Wilson, and the Mighty Cabanatuan Orchestra and Art Players. I had received a grant from the Descendants of the American Defenders of Bataan and Corregidor and part of the requirement was to present what had been funded with former POWs from the Bataan Death March and their assorted relatives and friends.
I'm not sure what I expected, but not on my list was to find another family be a part of. And find a family I did. There truly are only seven people in the world; not only did I meet other military kids (although, we can no longer officially be called "kids"), but I met people I had read about and people who knew about Zero. We spoke a common language and had a common background. Difficult to find I think, even with one's own family. It was emotional and exciting.
My presentation was well-received. My workbook required some edits based on audience feedback. My primer found a couple of new homes by way of educators I met.

No one found the typo on the title of the workbook until two weeks later when a 6th grader busted me. But that's a story for another day.