No One Wall is Big Enough

to list even one name of a soldier killed in war . . . any war. I'm talking about several walls, some large, some small, but each carrying the names of men and women killed in Vietnam. 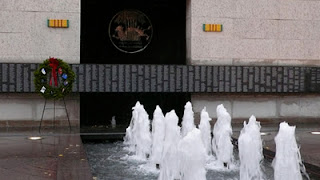 The photo above is from a Wall here in Chicago, just south of the river, almost touching the river; lots of green, lots of traffic noises, and the occasional jogger. Today it was the scene of a celebration of remembrance - for the men and women of Illinois who made the "ultimate sacrifice." There are more than 2900 from Illinois and 900 of those from Chicago.

Today's celebration, The Call for Photos, is a collaboration between The History Channel and the Vietnam Veterans Memorial Fund. This initiative has as its goal a photograph for every name on the Vietnam Wall - over 58,000 of them. These photographs along with other memorabilia will be housed at the soon-to-be-built Education Center at the Wall.

Readers of this blog and those of you who know me probably know by now that my Father was killed in Vietnam in 1967. His name is on Panel 25E, Line 94. I wasn't much interested in Vietnam until I got closer to the age he was when he was killed. Then, it became imperative to find a way to make sense of someone my age dying in a war; I use art and writing - it probably makes less sense now than it did. I'm almost 20 years older than my Dad was when he was killed. One of the speakers at the ceremony today was born the year I graduated from high school; his Father fought and came home. It wasn't until after the son had served three tours in Iraq that he could sit and have a beer with his father and understand. The son said that he still doesn't feel like he gave as much to his country as his father did. He's a nice young man, I met him, he's the same age my Father was . . . time has its own sense of humor and irony.

I'm still not quite sure how I got involved in today's event except that I answered a notice for The Call for Photos and someone called me back. To be honest, I didn't know there was a Wall here in Chicago until three weeks ago when this all began to unfold. But if I can share my photos and my stories I will. Today there were lots of those around. A group of maybe 30 people, mostly Vets, and me with a caring friend, sat in the pouring rain to listen to speakers, mostly politicians - but interestingly enough, most of them Vets. They got to sit under a tent, we sat under enormous umbrellas provided by The History Channel.

I was impressed and moved by a lot today - the Chicago Army Recruiting Battalion Color Guard who presented colors (they didn't have large umbrellas) and the 85th Army Band from Arlington Heights who played The National Anthem (no umbrellas) - but ultimately by a woman who sat in the back row of speakers. She was an Army nurse. She served in Vietnam. She was at the field hospital in Pleiku where my father first went after he was injured. I showed her a photograph and told her I didn't expect her to remember. She was silent for a moment before she told me that every soldier who came through her hospital was loved.
Posted by Scottie at 3:40 PM