Curt came to see me at Ragdale yesterday. We had lunch in Lake Forest and then walked back here so I could show him my studio. He asked about every single image I had on the wall, and I showed him the big-ish installation piece I'm working on. As I continued talking about the men on the wall, Curt said, "You've become friends with them." I guess I have. In some cases I still am in contact with them, in other cases I know some of their stories, and some I've just met these past two weeks.

My dad had two best friends, Ted Lilly and Frank Loyd. They practically grew up together; they left the Philippines together in May 1941 while their dads stayed behind. Chris Schaefer, in Bataan Diary, tells the story of what happened to the senior Loyd during the war, I write about my grandfather, but I'm not sure about the senior Lilly's story - I'm sure there is one. But back to the boys. They sailed home to San Antonio together, they went to high school together, and they were in the same class at West Point. BFFs, right? Ted and Frank were killed in Korea right after they graduated. My father was killed in Vietnam in 1967. I guess depending on what you believe, they will always be BFFs. Rest in peace all of you. 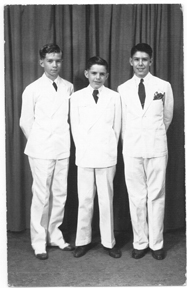